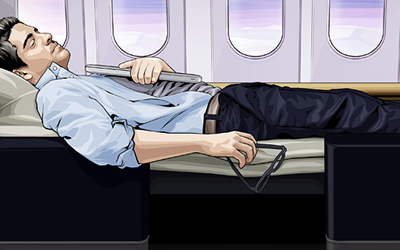 In June 1984, Virgin Atlantic operated its first scheduled service between Gatwick (current company headquarters) and Newark. With a little help from Virgin Records, the company managed to raise the finance for a second passenger plane the following year. Virgin Atlantic is now half owned by the Virgin Group, with Singapore Airlines owning 49% of the company’s shares. British Airways has been entwined in a somewhat peaceful rivalry with Virgin Atlantic for many years, as the two are the leaders in British air travel. It is also a known fact that BA did not want Virgin to be allowed access to London’s Heathrow Airport, for fear of too much competition in the UK’s largest airline hub.

Virgin offers a convenient door-to-door limousine service which takes all the strain out of hiring a cab or parking your car in the maze some airports call parking lots. They pick you up where you are, take you to the airport where mobile check in agents grab your details, luggage, etc and completely expedite you to the main lounge waiting areas, or get you on the plane…if your running late! Virgin Atlantic’s Upper Class is extremely popular – not only due to the lavish seats, but because of the service, clubhouses, along with a bar are located on the plane, and in pre-flight areas. Like other airlines they have a frequent flyer program, and are still “Red hot after 25 years”, a slogan Virgin coined for themselves.

The Virgin Atlantic Upper Class bed is fully flat, 80″ long, with ample width. Virgin is a class leader again with their herring boned design, where the seat actually flips to accommodate any pillows or other items you want to place in your bed with you. For those who are curious about what “herring bone” means; it refers to how the seat actually looks when viewed inside Virgin Atlantic’s Upper Class section. Soft leather and super breathable fabrics make the supplied bed and seat probably the most comfortable to sit and sleep on. It also makes more room in the aisle – everyone gets an isle seat in Upper Class.
Your space will have a 10.4″ TV screen, laptop power station and a large table, along with movies, games, music, bar, 5-star menus, etc.

Booking isn’t hard, Virgin Atlantic Upper Class service can be booked online, by telephone, and in person at their terminal locations. While they pride themselves on stellar service, the airlines themselves recommend that first time travelers seek out a travel agent. It is a necessary part of the travel puzzle with today’s complex booking requirements, confirmations needed, and customs/insurance concerns. These professionals deal with all the common issues every day. The extra cost involved often turns into savings made after the agent assesses you, and passes on their exclusive deals to you.

Back to Other Airlines